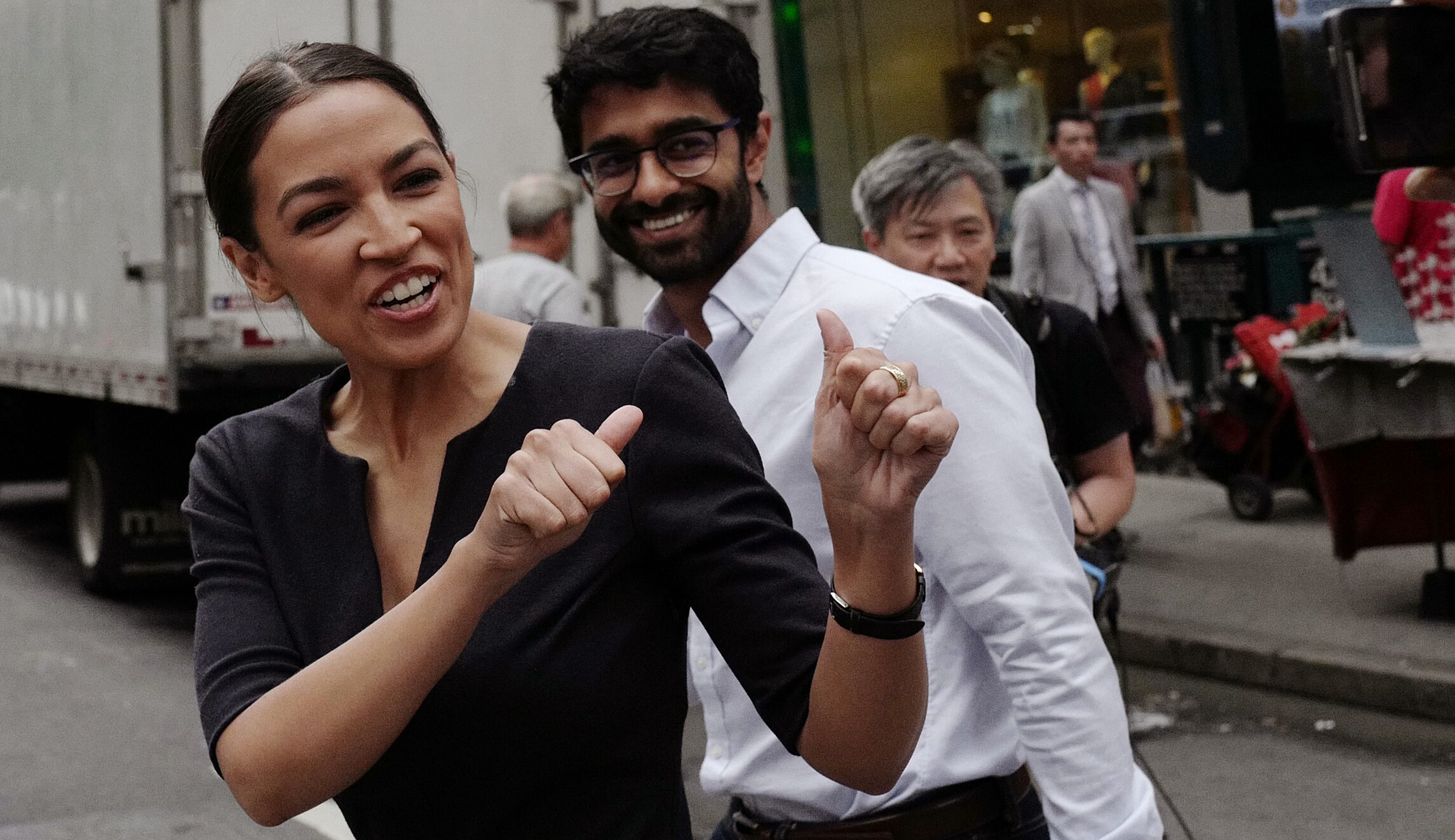 While Democrats have always embraced socialist policies to a certain extent, claiming to be a “socialist” was taboo until recently, with the change thanks in large part to a surge in millennial candidates running for office.

Even though the 2018 midterm elections are more than three months out, Democrats have quickly lost control of their agenda for the American people. Any plan that Senate Minority Leader Chuck Schumer and House Minority Leader Nancy Pelosi may have had for their divided caucus is now being forcibly pulled further to the left by Sen. Bernie Sanders, I-Vt., and Democratic congressional candidate Alexandria Ocasio-Cortez, a 28 year-old progressive darling of the Bronx who is almost certain to win her election in an overwhelmingly Democratic district.

The Top 5 Worst Journalism Moments of 2018

This brings us to the Democrats’ newest millennial problem: All the young, hip candidates have essentially embraced far-left socialism. Even worse, many of these candidates have all been endorsed by the Democratic Socialists of America and are touting their endorsement as a badge of honor.

In Pennsylvania, a number of Democratic primaries were successfully hijacked by far-left millennial candidates, which resulted in three primary victories by DSA-backed candidates. State representative candidates Summer Lee, 30, and Sarah Innamorto, 32, both pulled off significant upsets in their Democratic primaries, and are now running unopposed, essentially guaranteeing they will win.

Another candidate, Elizabeth Fiedler, 37, left her 10-year career as a journalist for NPR’s Philadelphia affiliate WHYY to join the primary race for Pennsylvania’s State District 184, where she was endorsed by DSA and won the Democratic primary in May.

While these four candidates are all running to represent different areas of the country in various political realms, they do have many policy goals in common. For example, all four candidates support universal healthcare for all, an idea that has been proven over and again to be

for consumers once implemented. Additionally, all four candidates spout vague talking points complaining about “economic inequality,” and essentially make it sound like the rich need to be

and made to pay more.

While having young, fresh faces on the campaign trail might look good for Democrats, it doesn’t help if they are openly supporting ideas and policies that are so far left that even senior Democrats have warned against adopting them. Just last week, former FBI Director James Comey sent out a frantic tweet in which he begged the Democrats to avoid skewing further to the left.

Barring a miracle, all four of these millennial socialist candidates will win their elections this November and begin injecting their voices into public policy once they are sworn in come January 2019. While it is still unclear whether Democrats will prove successful in picking up any seats in the House or Senate, the party will in fact have a larger socialist lean come November.

Most Millennials have a positive view of socialism and communism, but they don’t have all the facts.

..Denmark’s “major political parties… would oppose many of the proposals of Bernie Sanders on the regulatory side as being too leftist.”

The People’s Republic of Seattle, Home of Lenin. This is what progressivism looks like: crime, filth, decay, drugs, homelessness, hopelessness .

In the West, only a small minority advocates communism. But many more tend to downplay its evils, or are simply unaware of them.

…evidence speaks loudly that liberty, as mirrored in free markets, delivers. …socialist…will succeed only in bringing poverty and conflict.

“Once you get to the tippy tops, on your 10 millionth dollar, sometimes you see tax rates as high as 60 or 70 percent.”

Even the leftist Urban Institute agrees  that the Sanders-Ocasio-Cortez socialist medicine plan will cost upwards of $40 trillion.

President Trump is doing everything he can do, largely on his own, to prevent France and Europe’s present from becoming our future.

‘The powers delegated to the federal government are few and defined.’

He called her the “stupidest person ever elected to public office,”

Capitalism, not socialism, has lifted over a billion people out of poverty worldwide since 1990.

It’s time our politicians had the honesty and nerve to state the obvious.

Here we go again with election recounts in Florida, and The Daily Signal’s audience is none too pleased.

…the Deep State’s agenda behind the engineered influx of millions of Muslims into the West. In short, the agenda is to de-Christianize the Christian West and subvert nation states.

“Control healthcare and you control the people”

In the socialist philosophy, rights are conferred by and subject to the State. This makes the individual not a citizen, but a slave of the state, whose value is determined by the state.

Socialistic control cannot be forced upon free—and armed—citizens; that’s why each and every one of the socialists in the Democratic Party speak out against your rights.

The destructiveness of socialism, at its core, is its deliberate and intentional destruction of the price system and the incentive to produce at a profit.

The people of  Brazil  are rejecting a corrupt socialism that has ruined the nation’s economy.

The country has less than one-tenth the population of the United States but three times the murder rate.

Never let anyone tell you that Scandinavia is a Socialist paradise full of free stuff. Nothing on Earth is free. Nothing.

Socialism faces freedom, because when it breeds and thrives, people die. The promise of socialism is a lie.

From Marx and Bakunin to Saul Alinsky and Antifa, the radical Left has always had a fixation with Lucifer.

The socialist frame of mind can be summed up in one word: resentment.

… replacing U.S. policies with highly socialist policies, such as Venezuela’s, would reduce real GDP at least 40 percent in the long run, or about $24,000 per year for the average person.

The legacy of countries that have implemented large-scale socialist policies is one of failed policies, misery, and death.

Once people have seen what socialism is, they will not vote for it, but by that time, they may have no choice. Just take a look at Venezuela.

The observation that capitalism works and socialism fails is the point of  my two-question challenge  for my left-leaning friends.

History tells us that even before they run out of money, the socialists will run out of sanity.

The tried and failed method of the CPC to address problems—control, censorship, and propaganda— will not work in the short or long term, even if labeled and welcomed as new.

From: firebreathingchristian.com            By FireBreathingChristian Stealing is the norm in America. This[…]

Pro-globalist socialists have twisted virtually every word and action of Donald Trump to make them bad — just as they have done with the JBS for decades.

“The non-socialist vote in Sweden has never been stronger in modern history,”  explained  Nima Sanandaji,

Fact is, “socialism” only works when it’s paid for by capitalism.

If the cesspool is left unaddressed and socialism marches onward in America, slavery and death will be the inevitable result

… it’s been found that the  “happiest” countries take the most antidepressants .

As such, the “democratic socialists”—as they define socialism—are left with no successful examples of their vision, only disastrous ones.

“The problem with socialism is that you eventually run out of other peoples’ money.”

I hope at least a few Democrats will have the courage to teach millennials and others the history of socialism’s debilitating, murderous past and the historic human advancement that has been produced by a free market.

Who are the groups and individuals leading the Abolish ICE/Occupy ICE confrontations and agitation?

If you don’t think that socialism is on the rise in America, then you may want to stop watching MSNBC and start looking at the facts.

These myths about the “greatness” of socialism just won’t die, even after tens of millions of people have because of it.

Attacks upon Putin are just a way to subvert the results of the 2016 presidential election, even if it prevents President Trump developing a better relationship with a foreign country.

The Socialist Leftists both in power and on the street let the cat out of the bag when they admitted to being Socialists and wanting to transform the US into a Socialist country.

…as the cancer of collectivism rots away not only the country’s economy but its culture as well.

Invincibly ignorant, they assume the problem away by embracing the idea of redistributing other people’s money.

A political novice who calls herself a “democratic socialist” wins an unexpected Democratic Party primary victory, and now political taxonomists are racing to explain just  what the term means . Here’s my definition: political hemlock for the Democratic Party.

,,,”her understanding of socialism is so lacking that she might be better off sticking to comedy and leaving serious political analysis to those better qualified.”

Luba Wold doesn’t believe in communism, even in theory. She has experienced its reality.

In true Communist fashion, the Chinese government is using dishonest and underhanded tactics — and lots of money —

The European Union super-state and the globalist establishment that controls it, along with the open-borders and mass-migration agendas they are pushing, just suffered a massive defeat in Italy’s historic election.

When it comes to influence, billionaire George Soros prefers to exert his quietly, throwing money at globalist causes behind the scenes instead of speaking out publicly.

What a mess. In Bernie’s shoes, I probably wouldn’t want to talk to the press about it either.

World government and world socialism. Those are the explicit goals of the Socialist International

…Gates has shown himself sympatico to authoritarian and totalitarian regimes.

After  installing its agent at the top of Interpol , Communist China, the most murderous regime in recorded human history

…(NHS), reeling from a bad flu season and the chronic shortages common to socialized medicine, is postponing 55,000 noncritical operations

Socialists believe that socialist regimes have chosen the wrong jockeys to ride the socialist horse to its deserved victory. The problem with socialism isn’t a bad jockey—it’s the horse itself.

As immigrants who’ve shirked the legal process flock to California, and the repercussions from their act of defiance begin, the state’s future hangs in the balance.

Under socialism, things have gotten so bad in Venezuela

No wonder there is a disconnect between government and the governed.

A new German  study , based on data that Angela Merkel’s government

Citing an “appalling” climate for what the United Nations dishonestly characterizes as “human rights,”

This is a campaign in support of capitalism and against socialism.

Race was always a part of socialist thought

Socialism destroys countries’ economies: Under low doses of it, countries succumb slowly to its ravages, and high doses of socialism can cause a quick demise.